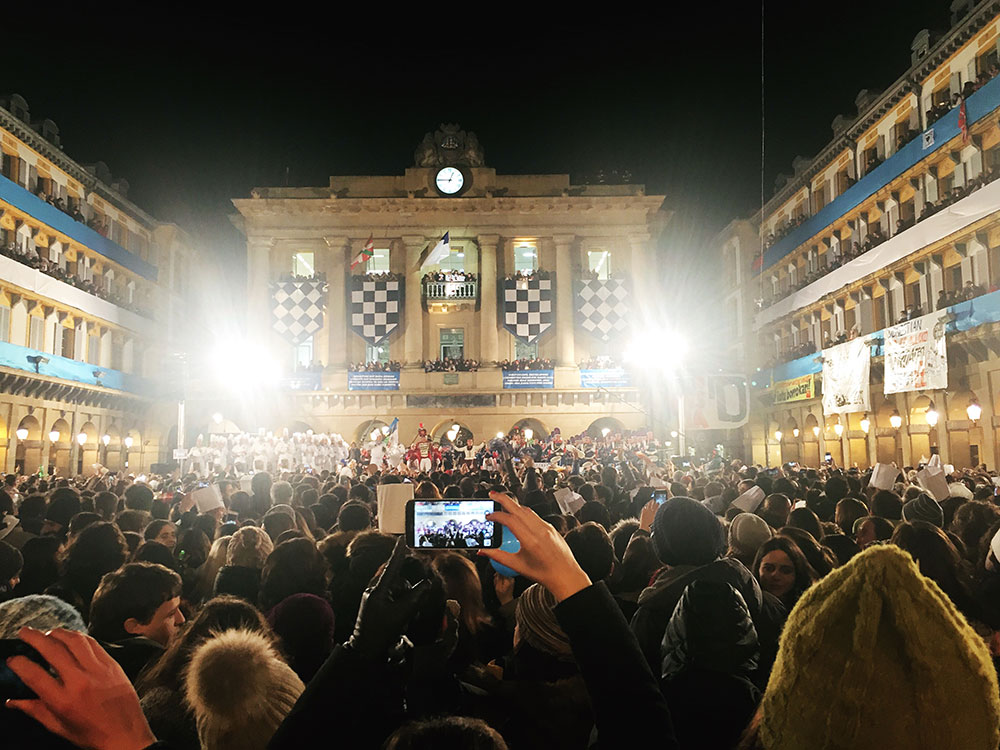 It was 11pm on a Wednesday night, and Betsy, Ben, Sami, Nik and I were at a bar, our third for the night. The five of us had been on separate road trips through the Rioja wine region and that Monday, Betsy, Ben and I had run into Sami and Nik at a winery called Marqués de Riscal (home of a gorgeous hotel designed by Frank Gehry). Over the next few days, we met up in Logroño, then San Sebastian for nightly pintxo crawls (pinxtos are Basque-style tapas popular in Northern Spain). That Wednesday night, we were enjoying one last round of pinxtos and vino/cervezas in San Sebastian before leaving the next morning: Betsy, Ben and I to return to Valencia, Sami and Nik to continue on to Bilbao. During our brief visit to the quiet surf town, we’d been noticing a slight uptick in activity. Blue and white streamers had been strung up in shops and restaurants, store mannequins had been dressed like chefs, and we’d seen a couple groups of people carrying instruments around the old town. Curious, we asked the bartender what was going on.

“La Tamborrada!” he replied. “It’s our biggest festival of the year. 24 hours of drumming. It begins at midnight tomorrow night and goes until midnight the next night.”

While a 24-hour drum circle sounded a little odd, “biggest festival of the year” was all Ben needed to hear to decide that we should stay another night. It took the rest of us a little poking around on the internet and a conversation with a group of Americans who had once studied in San Sebastian and had returned specifically for the festival before the rest of us were convinced. A few glasses of vino tinto might have also persuaded us to change our travel plans and extend our Airbnb reservations. Turns out it was definitely one of the best decisions I’ve made during Remote Year.

A description of the Tamborrada from EustoGuide.com:

The Tamborrada is San Sebastian’s most important festival and the entire city gathers together regardless of the cold or rain. More than 15,000 Donostiarras (the people of San Sebastian as they are called in Basque) that belong to over 100 bands, actively take part in the drumming.

Where does this seemingly strange celebration come from? It goes back several hundred years to the time of the Peninsular War, when Napoleon’s troops took over San Sebastian and a large portion of the city was burned to the ground. During this time of occupation, it was typical for the women to fetch water at one of the city’s two fountains. All the while, French troops marched around the city, banging on their drums. No one is quite sure who started it, but soon the women began to beat on the buckets as to mock the French occupiers.

With time, this show of defiance grew and began to have a deeper meaning for the city’s inhabitants. Culinary clubs (sociedades gastronómicas) are partly responsible for the event’s success. They formed many of the bands and this is one of the reasons why many of the drummers dress in chef uniforms. Other typical dress includes soldier uniforms and women wearing traditional Basque clothing.

The Tamborrada has become San Sebastian’s largest party, however, it is much more than that. It is a celebration of what it means to be a Donostiarra and a way for the citizens to connect with their identity. The celebration is also about overcoming tragedy, coming together as one and finding happiness. This is best demonstrated in the “March of San Sebastian” that is played throughout the 24 hours of the Tamborrada.

After the festivities kick off in the Plaza Constitucion, the bands then wind through the streets of the city, each playing the same half dozen or so songs while the crowd sings and dances along with drinks in hand. It puts St. Patrick’s Day in New York to shame, and while I’ve never been to Mardi Gras in New Orleans, I imagine the party atmosphere rivals that iconic celebration.

The five of us last-minute festival-goers paraded through the streets with thousands of locals, following different bands on their various routes, banging on souvenir plywood “drums,” dancing in crowded bars, and laughing at the drunk teenagers taking advantage of having the next day off of school.

Finally, around 5am we wandered back to our Airbnbs on the outskirts of the city center. We somehow managed to sleep through the hubbub until a couple bands found their way to the street corner directly below our window at about 9:30am.

As we left the apartment to head home at noon, we passed parents with their toddlers toting tiny drums lining the streets, following their favorite bands. Twelve hours into the festival, the party was still going strong.

The Tamborrada was by far one of the most random and most fun nights I’ve had during Remote Year, and I’ve found that such spontaneous adventures rise to the top of my list when recalling favorite memories. By nature, Remote Year is set up to encourage and cultivate such spontaneity. I used to think that planning a trip to another country six weeks in advance was being spontaneous. Now, having fully embraced making travel decisions on a whim, I’ve done things like wake up in northern Spain, turn to a couple of friends and say, “Hey, do you guys feel like working from a coffee shop in France this afternoon?”

Four months ago, Jenna, Ben, Sami and I planned a day trip to check out the Rila monastery in Bulgaria, followed by a hike to see the nearby 7 Rila Lakes. The evening before we left, we mapped out our drive, checked out some hiking tips online, and decided maybe we should include some overnight necessities in our hiking packs in case we decided to stay the night at a lodge at the top of the mountain by the lakes. When we arrived at the chairlift to take us up to the trailhead for the hike around the 7 lakes, we asked if there was room at the lodge. The chairlift ticket vendor shrugged her shoulders and said we’d have to ask them when we arrived at the top. We clutched our backpacks and made our ascent to the top, completely unsure where we were staying that night. It was 4pm and the sun was due to start setting at 6:45.

Sure enough, the lodge had room for the four of us. While on the hike, we ran into Kara, Mark, Gerry and Amanda, four more Remote Year friends who happened to be taking the same day trip. As the eight of us soaked in the view of the sunset, we convinced the others to stay the night as well. We spent the evening playing cards and chess and drinking rakia, a local liquor distilled by our fellow lodge patrons and new local friends.

The next morning, Jenna, Ben, Sami and I set out to return to Sofia, making a detour to visit what we thought was a small local winery, Rassin. Turns out what we thought was a tasting room open to the public was actually a private home that also had a wine-making facility that was still under construction. The grandmother met us at the door, which we opened opened hesitantly when we realized there wasn’t a sign posted. We realized that we were walking into a home when we saw their laundry strung out on the patio to dry. The grandmother called her daughter-in-law over to speak with us because she couldn’t speak any English. She spoke enough English to understand that we were looking to try some wine, so she brought over four different wines (a muscat, a chardonnay, a cab, and a mavrud, I think). We tasted them while the family dogs ran around our feet. She refused to charge us for the tasting, so we asked if we could buy a couple bottles. She came back with 3 litres(!) of wine in plastic bottles and her son, who spoke fluent English.

He told us how they were in the process of constructing a tasting facility that will eventually be open to the public (it was gorgeous, looking like a small castle on a side of a mountain in the Bulgarian countryside), but they had been making wine for about a decade, using grapes they sourced from the region. We asked if we could see the wine-making facility, and he apologized profusely that it was a bit of a construction zone. We assured him that we didn’t care, and just wanted to learn from him. He took us inside and showed us the two giant vats they had on the ground floor, as well as 4 or 6 in the basement.

He offered us tastings directly from the vat, and then asked if we were at all interested in tasting their reserve wine, a rubin-merlot-cab-syrah blend, from the barrel. Ummmm….YES! It was so good, and we immediately bought a couple bottles of that red wine from the previous year. I think we ended up leaving the place with 3 litres and 4 bottles of wine, all for about a total of around $25USD.

Stories like these happen all the time during Remote Year. It often seems like it’s not real life, but more than that, I think it’s a more a matter of being part of a culture that has encourages spontaneity. It makes me wonder why I don’t take more such trips back home in Phoenix. Why have I not visited the wine country in southern Arizona? Why don’t I pop up to the Grand Canyon more often? When I make it back to Phoenix sometime this fall after Remote Year ends, I’m going to make an effort to infuse my routine back home with more such spur-of-the-moment fun.