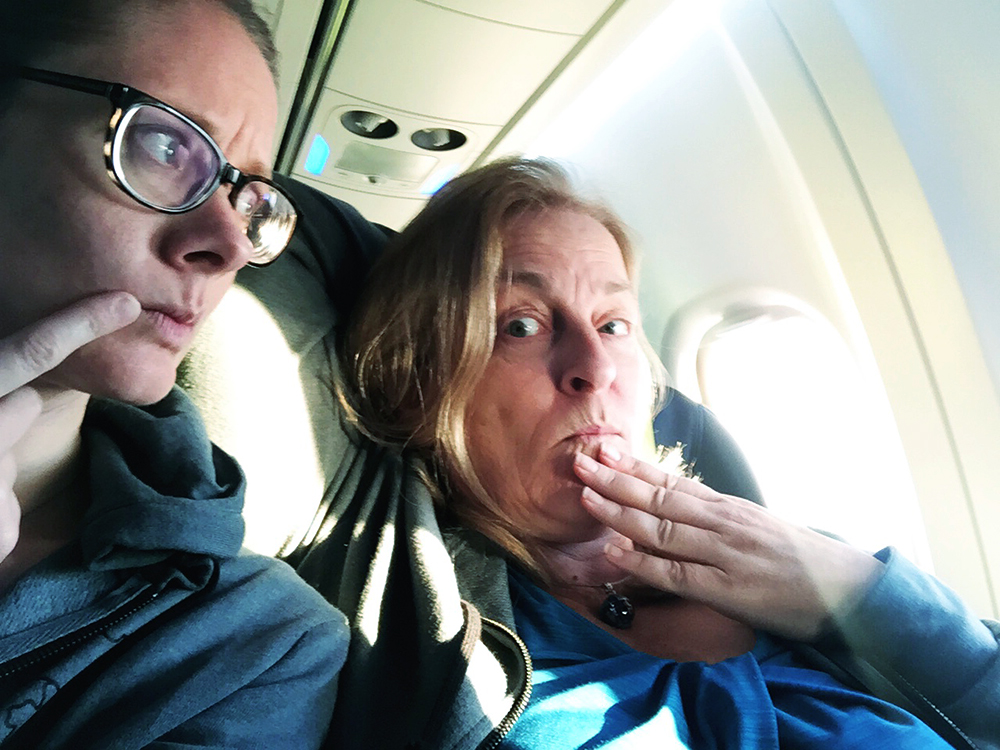 With a 23-hour travel day in front of me, I had an ambitious plan for my productivity when I first stepped out of my apartment in Valencia, Spain, a week and a half ago. I had a client layout to mock up, a side trip budget to update, some email correspondence to complete and a blog post to compose. The blog post was going to reflect on the value of embracing spontaneity during my recent road trip through northern Spain (and I’ll get around to sharing that story eventually), but “spontaneity” was swiftly supplanted by her impetuous sibling “misfortune.”

My fellow Remote, Janet, and I opted to leave our Remote Year Ikigai crew a few days early to make trips to our respective homes (mine in Phoenix, hers in Toronto) before meeting back up with the community in Mexico City. We were booked on the same 6:40am TAP flights from Valencia to Lisbon, then Lisbon to Newark. Before landing in Phoenix, I had planned to have an overnight stopover in San Francisco to see my grandparents, but my prospect of seeing the Golden Gate Bridge that night was dashed as our plane reversed its descent just as we passed over Lisbon’s Golden Gate look-a-like. What a strange sensation to be meters from the ground only to pull back up above the clouds. Turns out the fog in Lisbon was too dense for a safe landing (the Portuguese capital really is a twin to SFO). Our propeller plane didn’t have enough fuel to circle the city until the fog cleared, so we headed 30-minutes south to the Algarve coast, where we chilled in the Faro airport. Three hours later, as we descended toward Lisbon and viewed the 25 de Abril Bridge for the second time that morning, I turned to Janet and commented, “Whelp, I think this view is the closest I’ll get to San Francisco today.”

Sure enough, I ended up staying in Queens, NYC that night (props to Chase Sapphire Reserve for taking care of my hotel arrangements), and I eventually made it to Phoenix on Thursday afternoon. I only broke into tears once when a TAP ticketing agent told me that my non-refundable flights to SFO and PHX would be lost and I’d need to book a new last-minute flight to PHX. (Yet another high five to Chase Sapphire Reserve for reimbursing me the cost of unused flights due travel delays.)

If there’s one thing this itinerant lifestyle reinforces, it’s to roll with the proverbial punches. Flight delays? Check a variety of route options through the most convenient hubs, pick a new one, then book a hotel with an Instagram-worthy ambiance. Missed a train? Grab the next one…and a beer at the station bar while you wait. Stuck on a snowy highway in central Spain without any cell phone service? Say a prayer of thanks that you have a full tank of gas and blast your favorite Spotify playlist as you swap dating horror stories with your road trip buddies.

Each of these punches are unraveled travel experiences from my archives, and they undoubtedly won’t be the last. The coda to this most recent unraveled moment is that I was able to use points to book new flights through the Bay Area for a longer stay than my original travel plans. Instead of a whirlwind 18-hour visit coming off of jet lag, I was there for two full (and fully rested) nights. I was able to spend more precious time with my grandparents and the rest of my family in the area. It turned out that what seemed like misfortune in the moment ended up being a golden opportunity…although I never did catch a glimpse of that lovely bridge as I flew in or out. I guess I’ll just have to plan another trip.